Sep 28, 2020 2:58 pm Ibrar Younas 5267
WIDESPREAD water shortages are set to continue after it was announced that repairs to the 80km undersea pipeline carrying supplies from Turkey would not be completed until Monday at the earliest. 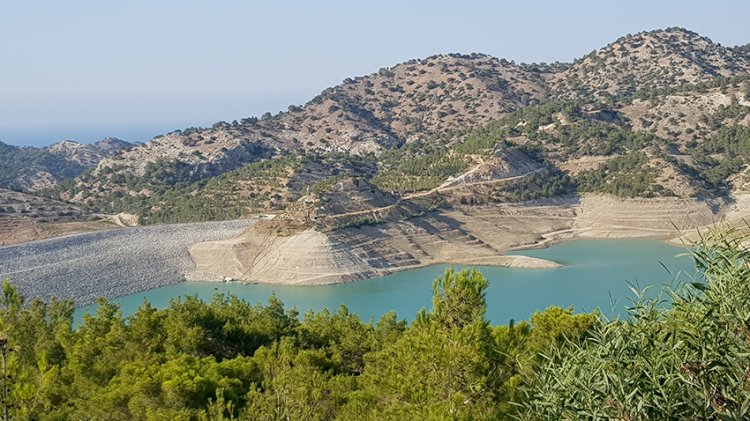 Prime Minister Ersin Tatar and Turkish Vice President Fuat Oktay had earlier this month announced that the pipeline – which has been out of action since it broke in January – would be fixed by September 25, as previously reported by Cyprus Today.

However Agriculture and Natural Resources Minister Oğuz Dursun disclosed on Wednesday that the pipeline deadline would be missed by at least three days due to delays caused by bad weather off the coast of Mersin, Turkey, where five ships and undersea robots were involved in the operation.

Mr Dursun then appeared to cast further doubt on the new, September 28, target during a TV interview yesterday, when he said that the “definite date” would be announced by Turkey’s General Directorate of State Hydraulic Works (DSİ).

He said that teams were working “around the clock”, despite the “stormy” conditions, to reconnect the pipeline and that a sixth ship had been sent to the region to help speed things up.

Mr Dursun said that the last section of the pipeline was being put in place and that once that had been done, water would take “about 16 to 18 hours” to reach the Geçitköy dam.

“We won’t wait for the reservoir to fill up, we will treat the water and start supplying it [to the rest of the TRNC] straight away,” he said.

It had been expected that uninterrupted water supplies would again begin flow to households and businesses throughout the North Cyprus today if repairs had been completed, as planned, yesterday.

Consumers inundated social media with their water woes, with one person stating that they hadn’t received any mains water for 10 days.

“In the absence of supplies from Turkey, we are using local underground water resources where possible but some parts of the country do not have those [resources], so they experience continuing shortages,” a Waterworks Department spokesman said.

Cyprus Today spoke to several mayors this week who all said they had been forced to start rationing water as the Geçitköy reservoir, which is fed by the pipeline, dried up.

Girne Mayor Nidai Güngördü said: “We are operating a rationing system to distribute water supplies equally throughout the district using local resources, although the levels of these are decreasing.

“Unfortunately, therefore, cuts in supply will continue until the arrival of supplies from Turkey.

“It is, though, an advantage that many hotels are closed and that there are fewer students in Girne, so overall consumption is reduced.”

Mr Güngördü also highlighted that, due to the difference in levels, consumers closer to the sea have fewer interruptions in supply compared to those on higher ground.

Çatalköy Mayor Mehmet Hulusioğlu said that his municipality was also able to use local water supplies but was having to turn them off every two or three days.

“As with many districts, we will resume a normal service again when the water eventually arrives from Turkey,” he said.

Esentepe Mayor Cemal Erdoğan, said: “Our local resources are only enough for the fountains in the centre of the village, so water supplies are being cut every two days. Approximately 10,000 people live in locations where they are unable to receive mains water, so they have to be supplied by tanker.”

İskele Mayor Hasan Sadikoglu said his municipality was having to cut water supplies every three days, and had enough supplies to be able to do so until Monday, with water tankers serving Boğaz and Kumyalı.

Lapta Municipality engineer Barış Ülbar said that a lack of local resources meant that water supplies had to be cut every two to three days, while some areas were receiving tanker deliveries only every four to five days.

Lapta Mayor Mustafa Aktuğ, added: “We are experiencing the same problems as other municipalities. We distribute water on an rotational basis.

“However, Tepebaşı, Akdeniz and Çamlıbel villages are unable to get water. Therefore our municipality provides water with tankers.”

Meanwhile water tanker drivers in Lefkoşa said they were struggling to meet demand, with one saying he receives up to “200 calls a day” from potential customers.

The driver, who spoke to Cyprus Today’s sister newspaper Kıbrıs, claimed he was one of only 10 working in the Lefkoşa Turkish Municipality area.

“I routinely receive between 150 and 200 calls a day asking for deliveries,” he said. “The situation is made even worse by the fact that there used to be around 80 water tankers operating in the Lefkoşa area but now there are just 10 of us.”

Amid reports that some water tanker owners were charging as much as three times their usual fee per tonne of water, Mr Dursun called on sellers show “compassion” to the public.

“A month ago they were charging 20TL, but now a tonne costs 50 to 60 TL,” he said. “This is unfair and they need to act compassionately.”