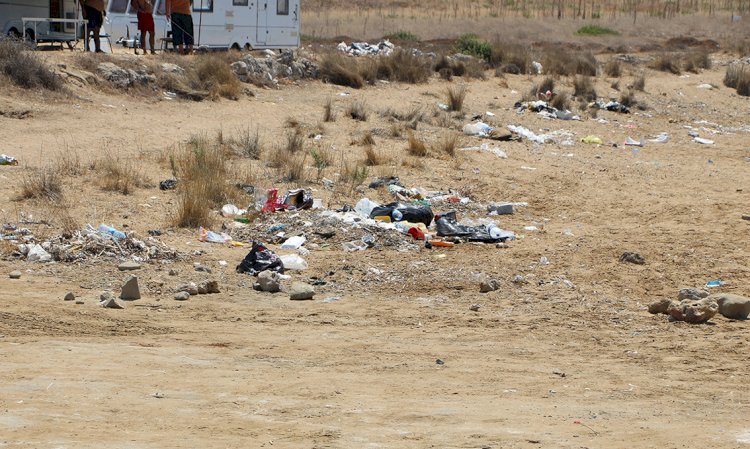 “Urbanisation of the beach should be halted and effective measures taken to protect it,” Doğan Sahir, head of the Green Action Group demanded.

He said that piles of plastic and glass bottles, barbeque waste and other rubbish were being constantly dumped on the sand, mainly by long-term residents.

“The camper van and caravan lifestyle was intended to involve temporary accommodation but at Kaplıca it has mushroomed into a permanent and dirty shanty town, which was never intended,” Mr Sahir said.

“People who create such accommodation start to see it as their right and TRNC municipalities are complicit in allowing them to live on the beach area, not as temporary but as semi-permanent residents and without adequate supervision.”

Mr Sahir claimed that a draft law proposed last month would be insufficient to provide protection for Kaplıca beach and other beauty spots, saying: “Around the world, people in camper vans can generally stay in one registered location for up to six months, after which they are required to move on.

“In the TRNC, however, there is no such enforcement, so beautiful, natural locations become urbanised.

“Camper vans should also be accommodated away from wildlife and provided with adequate facilities and infrastructure, including for sewerage, water and rubbish disposal.

“Long-term residents also prevent other people from staying for just a couple of days, for example as part of a touring holiday.”

Kaplıca village muhtar Adem Baş expressed concern about the state of the local beach, saying: “We try to protect the caretta caretta turtles and sea daffodils as best we can but people staying there turn the area into a rubbish dump overnight and even litter bins put there by the municipality are stolen.”

Büyükkonuk Mayor Ahmet Sennaroğlu said: “There are camper vans on all ferries coming to the TRNC, so why is there no law to control that? There is no current, effective law to control camper vans, although one is pending enactment.

“Those who complain should have seen the camper van area in 2016. We organised Kaplıca beach that year to provide drinking water as well as a drainage system and toilet facilities. The longest time that people can legally live there, however, is one year.

“We never let anyone create shanty developments, if they attempt to do so we cancel their contracts and send them away.”

Speaking to Cyprus Today on Thursday, Mr Sennaroğlu added that the rubbish situation remained unchanged “despite our complaining about pollution caused by caravan owners”.

He said there are two authorised camper van sites in the Kaplıca region, which he said are cleaned and inspected regularly, but that campers “use other places without permission”.

CARAVAN owners in Salamis staged a protest on Wednesday over plans by Yeniboğaiçi Municipality to demolish “illegal” structures built at the Kolimbos Forest Camping Site. The “temporary residents” were denied access to the site after they were told to “pack their belongings” and leave so that council workers could move in and clean up the area. The local authority accuses the campers of building permanent “summer houses” in the forest and “damaging the environment”.  Campers’ Association Chair Mustafa Baturalp said that his organisation’s members had done nothing against the law, and that it was Yeniboğaiçi Municipality that was acting “illegally” by blocking access to the site.