Feb 22, 2021 10:27 am Ibrar Younas 908
THOUSANDS of applications have been made for food parcels as the TRNC entered the third week of a national lockdown. 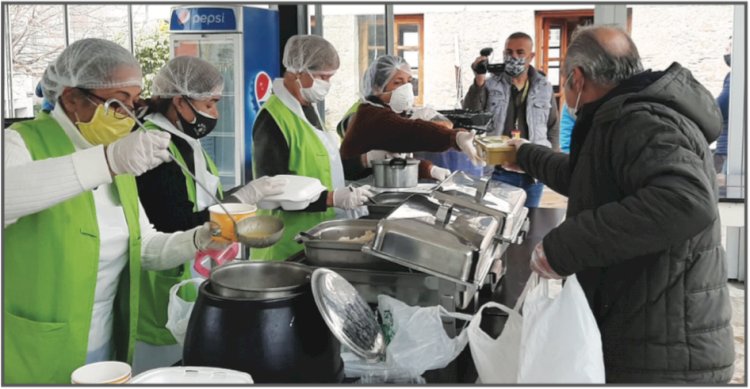 At the start of the week the Labour and Social Security Minister Koral Çağman announced that 9,200 individuals had filled in forms via the website basvuru.csgb.gov.ct.tr for food aid from the Social Services after he asked muhtars to identify those most in need.

Among those receiving food support were university students and people unable to work because employers have not renewed their work permits.

Stating that a Social Security Department “Food Bank” already existed, Mr Çağman said that it was “empty” when he came to office last year.

Providing an update on the food aid programme to Cyprus Today yesterday, Labour and Social Security Ministry undersecretary Özgü Bayraktar said that the number of applications had risen to 12,000,  although some of those applications were made by different people from the same household or by people who are employed, he noted.

Applications for the scheme closed yesterday, but Mr Bayraktar said: “If the amount of packages prepared does not match the number of people who need aid, then more packages will be prepared. If anyone is in real they should contact us [the ministry]. We will help them.”

The Queer Cyprus Association said that “according to the statement made by [Mr] Çağman, the ministry will supply food and cleaning aid to social risk groups regardless of residence and citizenship status to prevent them from becoming more vulnerable”.

“The groups that can benefit from these services are: LGBTI+s and foreign students with no income; the elderly and disabled individuals who cannot benefit from care services; single parents and workers who lost their jobs and /or became irregular/undocumented workers due to the pandemic.”

In a separate scheme 10,000 food parcels were donated by Halil Falyalı and Hüsnü Falyalı to Girne Municipality which will be distributed in cooperation with the Presidency, Interior Ministry, Lefkoşa and Girne District Governorships, and Girne Municipality.

Individuals have also been trying to help those struggling to make ends meet. Amore Tanning and Beauty Salon owner Natasha Louise Atik told this paper that 40 households have received food aid and basic need supplies this week during an “ongoing” mission.

Ms Atik, with the help of İsmail Keleş, have been distributing packages to people in the Alsancak, Lapta, Karşıyaka and Girne areas. The salon in Lapta is used as a venue for anyone who wants to donate to this cause.

“We are using Facebook as a platform; people have been doing this anyway. People bring everything to us and we prepare the packages here. A hundred people have helped this week. “They give the details of what is needed. . . Some [households] have dry food but need oil. Some need baby milk. . .  people are in need of different things.

“We saw many things today that most people wouldn’t even comprehend. One little girl burst into tears when she saw the food donations, and we had put crisps in too.

“Her mum actually showed me a vegetable storage place and she had asked the man not to throw out the groceries that had gone bad, but he did and she went through the bins for fresh produce for her children . . . let’s all think about that for a second and imagine the desperation.”

Aid campaigns have also been launched by the Esentepe Red Crescent branch, and the Turkish Red Crescent, which supplied a month’s worth of firewood to 60 needy families in Lefke, Güzelyurt and Lefkoşa.