Feb 1, 2021 11:06 am Ibrar Younas 1714
THE second batch of Covid-19 vaccines from Turkey arrived by air ambulance early on Thursday morning. 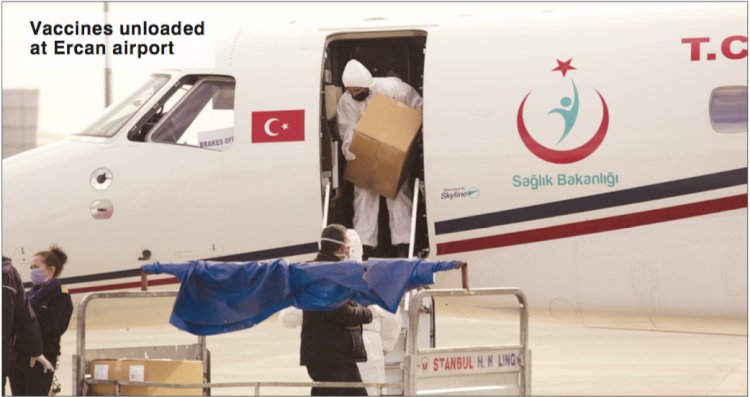 THE second batch of Covid-19 vaccines from Turkey arrived by air ambulance early on Thursday morning.

The 20,000 CoronaVac vaccines, developed by the Chinese firm Sinovac, were unloaded at Ercan airport.

They were then sent to the Drug and Pharmacy Department (DPD) in Lefkoşa to be registered before being dispatched to vaccination centres around North Cyprus, Health Minister Ali Pilli revealed.

Ayşe Gökyiğit, head of the DPD, said that the vaccines were delivered in a “cold chain” and that temperature checks were carried out.

She called on members of the public to “not to panic” as more vaccines are going to be sent from Turkey and the vaccination campaign – currently focused on those aged 65 and over – will continue.

Dr Pilli said during a TV interview that the number of vaccination centres had been increased from five to 15 and that, as long as there are enough vaccines, up to 5,000 people a day can be inoculated.  Some 20,000 people have so far received their first jab, Dr Pilli said – which equals around five cent of the population.

The total number of vaccine doses ordered from Turkey is 500,000 but this number will become “definite” in the coming days, Dr Pilli added.

“There are 88 patients in the pandemic hospital [as of January 28],” he said. “Most of the incoming cases have problems with their lungs.”

Other figures showed that as of January 28 there were nine Covid-19 patients in intensive care. The last week has also seen two more deaths – including a 40-year-old man with no underlying health conditions, the youngest victim in the TRNC so far.

Meanwhile another 1,170 doses of the Pfizer/BioNTech vaccine from the EU were handed over to Turkish Cypriot health authorities by their Greek Cypriot counterparts on Monday. That was in addition to 1,080 doses sent on January 18.