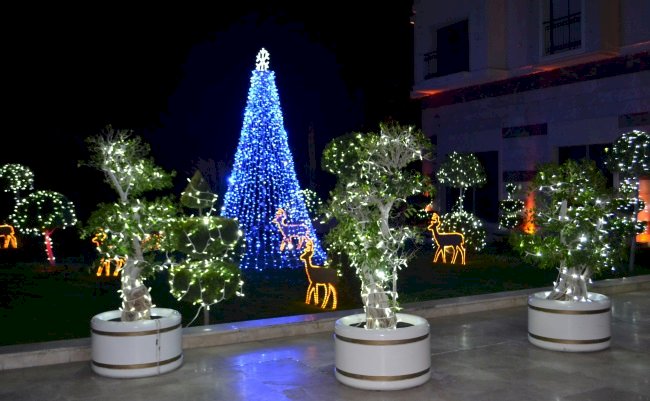 NEW Year celebrations in North Cyprus have been cancelled while uncertainty is hanging over Christmas Day lunches and events as authorities continue to grapple with the Covid-19 pandemic.

Some venues have decided to cancel Christmas Day events after Thursday saw the highest number of new positive cases in the TRNC since early September, with 33 confirmed, including 13 new local ones.

The number was later revised up to 43, after Health Minister Ali Pilli – who is self-isolating after being in contact with a Covid-19 positive person – said that 10 more cases were added to Thursday’s count.

A number of positive cases were also recorded this week at Lefkoşa State Hospital, including the chief doctor Adil Özyılkan, and one worker who did not disclose the fact that they had been in contact with a positive case, before also testing positive for the disease.

The worker had even slept at the hospital to “protect their family”, it emerged.

Dr Pilli said an investigation had been launched and that the “irresponsible” person would be punished.

He stressed, however, that the hospital “will continue to serve the public safely” and that “people should not worry” after tests on all other members of staff came back negative.

On Monday a series of new measures were announced by the Communicable Diseases High Committee, including a complete ban on New Year parties and street celebrations.

Other decisions taken included extending the length of quarantine for visitors to the TRNC from seven to 10 days; a temporary ban on people crossing to South Cyprus for work, although this decision was later amended following protests; a requirement for taxi drivers to go into quarantine if they drive to South Cyprus and back again; and the closure of all bars, clubs, night clubs, “meyhane” and similar establishments from December 15 to December 25.

Cafes and restaurants can remain open provided they adhere to Covid-19 rules stating that no more than six people can be at a table and that hygiene rules are followed. There must also be a distance of at least 1.5m between tables and 60cm between chairs.

Speaking to Cyprus Today, TRNC Restaurateurs Union (Res-Bir) head Salih Kayım said: “It is advisable for people to check if Christmas events will still be held, because many have been forced to cancel their planned events due to the Covid-19 measures. . . If the current spike in Covid-19 cases continues, a new decision can be taken at any time by the Health Ministry to cancel all Christmas celebrations as well.”

He also called on the government to “reconsider” the ban on New Year celebrations due the “economic hardship” Res-Bir members have experienced this year.

An Ozanköy bar owner, who did not wish to be named, said they had cancelled both their Christmas and New Year events. “What can we do? Health comes first,” the bar owner said.

A “Traditional Christmas Day Lunch” at the Kaya Palazzo in the Girne district is due to go ahead, the hotel said in an online notice: “We have taken our coronavirus measures to provide you with quality and safe service,” the message said.

“Our Christmas meal will be held . . . in accordance with the rules of social distancing and the number of people.”

The British Residents Society (BRS) has advised its members to “contact the respective hotels to check what effect these rules will make to such [Christmas] events”.

BRS chairman Peter Wilkins said he was aware of “some events” being cancelled, adding: “The government has acted fairly and quickly. It is regrettable, but necessary.

We were going to go to Hoots [restaurant in Ilgaz] but we have been informed that the planned live music has been cancelled due to the new measures, although the meal and celebrations will go on with social distancing, etc.

“Most people are taking things seriously and acting responsibly and with understanding.

“North Cyprus is still the safest country to be in when compared to other parts of the world.”

Meanwhile Dr Pilli said on Thursday that the TRNC was “making preparations” for the arrival of Covid-19 vaccines.

“We are planning to administer the vaccine to 52,000 people in the first phase,” he said during a TV interview, without giving any timeframe.

“Those who are over 65, who have chronic illnesses and other risk groups will be given priority.”

A government tender has been launched for two “vaccine storage refrigerators” that can hold 700 and 200 litres of vaccine respectively, he said.

North Cyprus currently has two refrigerators, with a combined capacity of 250 litres, that can store Pfizer vaccines at a temperature of -70C, Dr Pilli said, adding that the new emergency hospital in Lefkoşa will be “fully opened” in the coming days.