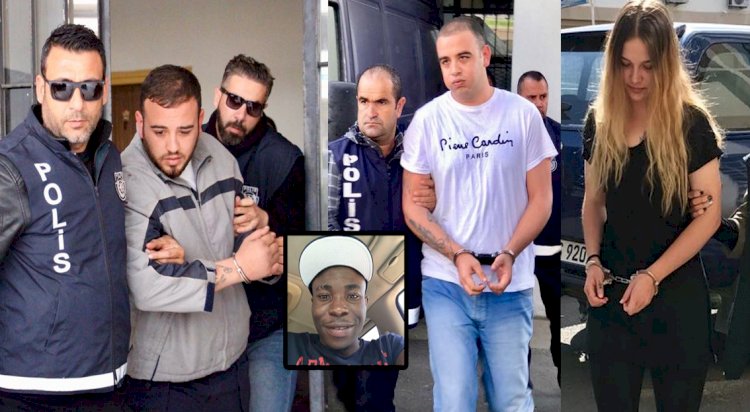 JUSTICE has been served “at last” for Kennedy Dede, a Nigerian national who was battered to death in North Cyprus three years ago, after his killers were sentenced to a total of 79 years.

A panel of three judges at Gazimağusa Criminal Court unanimously sentenced Nidai Şanlı to 27 years, Onur Körkurt to 17 years, Ozan Körkurt and Simge Dağdur to 13 years each, and Zekeriya Kurucu to nine years in prison on Tuesday.

There was tight security in place as the five defendants, aged between 18 and 29, who had been in custody since March 2018, were brought to the courthouse to learn their fate.

They wept as Judge Fatma Şenol handed down their sentences. Onur Körkurt fainted and had to be taken by ambulance to hospital with a police guard, while relatives of the guilty protested against the sentences outside the court.

A statement titled “Justice at Last for Kennedy Dede” from the Voice of International Students (VOIS) in Cyprus, set up following Dede’s death, said: “Kennedy Dede was murdered in cold blood in January 2018, and we are extremely delighted that his killers have been brought to justice.

“We are deeply appreciative of the job the police and the judiciary system have done in general, to ensure justice.

“We hope that the Dede family can find comfort in the fact that the killers . . . have been brought to justice.

“The unfortunate death of Kennedy Dede was the final straw which broke the camel’s back and led to the founding of VOIS Cyprus. We are extremely grateful to the Dede family for allowing us to play a role in following up with this case, including the attendance of some of the court sessions. Three years on we are happy that this case is finally over.”

The body of Mr Dede, who was 28 at the time of his death, was discovered lying in water at the edge of the Çanakkale lake in the Gazimağusa district by two children.

Forensic investigators said at the time that Mr Dede had been badly beaten at his home in the Kaliland area of Gazimağusa on January 29, 2018, before being bundled into a car and attacked again at the waterside.

A post-mortem had revealed that he died of a brain haemorrhage and lung injuries caused by “blunt force trauma”.

Mr Dede was an architecture student at Eastern Mediterranean University (EMU), but had let his enrolment lapse in the summer of 2017.

His distraught sister Mariam, an EMU graduate, told Cyprus Today at the time that her brother was a “good man” who “never hurt anyone”.

Prime suspect Şanlı initially fled to South Cyprus before returning to the TRNC and handing himself over to police.

Reading out the verdicts on Tuesday, Judge Şenol said that the defendants had murdered Dede in a “savage way” and that Dede “must have died a painful death” due to the “severity” of his wounds.

“The public conscience has been shaken by the fact that a group of people, at such a young age, caused the brutal death of another young person because of herd psychology or peer pressure,” Judge Şenol said.

Describing Nidai Şanlı as the “lead actor” in the crime, Judge Şenol explained that he deserved a longer sentence than the four other defendants who “didn’t even know the victim, let alone have any animosity against him”.

“According to the facts of the crime, Nidai Şanlı, who is 10 years older than the other suspects, had beaten the victim both in front of Kuzenler Apartment and at the Çanakkale lake before using an electroshock device on him,” Judge Şenol said.

“Nidai Şanlı had punched and slapped the victim as well as kicking his head as if it was a football.

“He savagely battered the victim after attacking him. Not content with that, he had left the victim half naked in the water lying face down.

“Another aggravating factor for Şanlı is that he had used an electroshock device on the victim shortly before the incident. Şanlı had made a habit of such behaviour.

“It is clearly obvious that Ozan, Onur, Simge and Zekeriya had become involved in this crime by the lead of Nidai Şanlı, who they see as a ‘big brother’.

“After the crime was committed, Nidai Şanlı showed no remorse and escaped to South Cyprus and later returned to turn himself in.

“Ozan Körkürt, who assisted the police from the first day of his remand, was dragged into this crime by his older brother Onur Körkurt and actively battered the victim. Onur Körkurt is the second most active person of the crime.

“Zekeriya Kurucu, who aided the crime by letting his vehicle be used . . . cried during the assault at the Çanakkale lake and his regret started from that moment. After yelling ‘the police are coming’ Kurucu managed to stop the assault.

“The youngest among the defendants is Simge Dağdur, who only participated in the crime during the assault of the deceased at the Çanakale lake.

“Upon learning that the police were looking for her, she fled to South Cyprus with Onur Körkurt and later surrendered herself to the police.”

Judge Şenol said that “the fairest punishment for the defendants is imprisonment” and stated that the crime of “murder is punishable by up to life imprisonment under the law”.