Sep 15, 2020 9:09 am Ibrar Younas 4013
AN ONLINE petition calling on the British government to authorise direct flights between the TRNC and the UK has received more than 10,000 signatures – with its creator now aiming for the 100,000 signature mark. 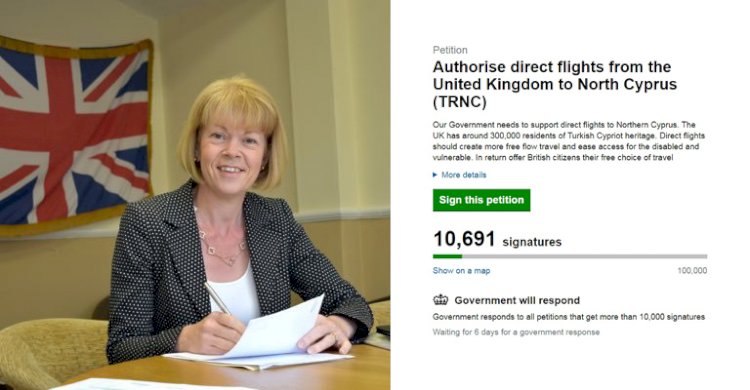 The 10,000 figure was reached last Saturday, and by Thursday around 10,700 people had added their names to the list.

The UK government promises to respond to all petitions that get more than 10,000 signatures.

In a public post shared on Facebook while the signature tally stood at 9,999, Hasan Özkoç, who created the petition, said he was writing a letter to Prime Minister Boris Johnson to explain “in-depth why we should have direct flights to Northern Cyprus”.

“I could read the letter to you, but I’d prefer … Boris Johnson to be the first one who reads it, or his team to read it first,” he said.

Mr Özkoç added that he had received “good support” from a number of companies and from Cyprus Today newspaper.

He now hopes to gather 100,000 signatures for the petition by its official deadline of 27 January, 2021. If he does then the issue will be considered for debate in the UK Parliament.

The petition says: “Our Government needs to support direct flights to Northern Cyprus. The UK has around 300,000 residents of Turkish Cypriot heritage.

“Direct flights should create more free flow travel and ease access for the disabled and vulnerable. In return offer British citizens their free choice of travel.

“If we have completed Brexit, we would like to see the UK authorise a direct flight from the UK to Northern Cyprus without the EU’s interference. Direct flights should boost tourism as this direct flight has never been in effect.”

Asked by Cyprus Today to comment on the petition, a British Foreign, Commonwealth and Development Office (FCDO) spokesman referred to a written answer provided by FCDO minister Wendy Morton on March 3 in response to a question on direct flights between Britain and North Cyprus by Conservative MP Matthew Offord.

In the answer, Ms Morton said that the “UK Court of Appeal has confirmed that direct flights from the UK to Ercan airport in the northern part of Cyprus would breach obligations under international law”.

The FCDO’s position on the matter remains “the same as outlined in that PQ [parliamentary question]” the spokesman told Cyprus Today on Tuesday.