Sep 14, 2020 9:36 am Ibrar Younas 1243
NORTH Cyprus was in partial lockdown this week after an alarming rise in locally transmitted coronavirus cases prompted the government to reintroduce strict restrictions, including the temporary suspension of all but emergency and military flights into the TRNC. 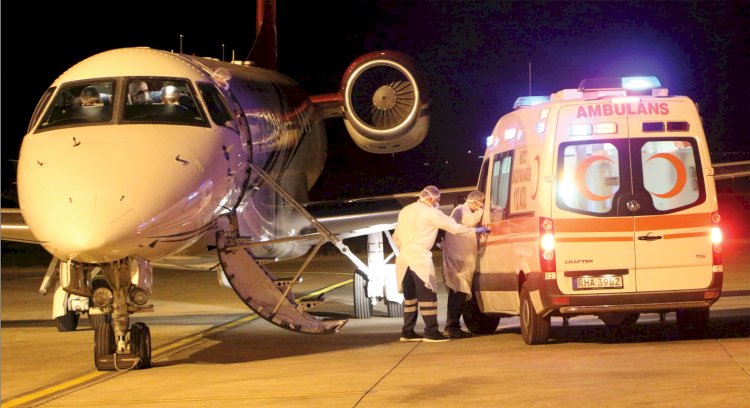 NORTH Cyprus was in partial lockdown this week after an alarming rise in locally transmitted coronavirus cases prompted the government to reintroduce strict restrictions, including the temporary suspension of all but emergency and military flights into the TRNC.
There were dramatic scenes on the tarmac at Ercan airport at midnight on Wednesday night as the first four of 12 coronavirus patients – all Turkish citizens – were transferred to a special Turkish Health Ministry air ambulance.
Prime Minister Ersin Tatar disclosed the evacuation plan in a statement that highlighted a recent undertaking by the Vice President of Turkey, Fuat Oktay, that he would not allow Turkish patients to be a “drain” on the TRNC health system and would transfer them to Turkey if necessary.
“Turkey stands with us in our fight against Covid-19 and we will overcome this challenge with its help and support,” the statement said.
Speaking to Cyprus Today on Thursday, Health Ministry Undersecretary Ali Çaygür, said: “Only Turkish citizens are being sent to Turkey, not Turkish Cypriots or expats.
“We asked the authorities in Turkey to take their infected people in order to prevent our pandemic centres becoming full, although at the moment they are 70 per cent empty.
“The Turkish patients will be taken to pandemic hospitals in Turkey and all expenses for their transportation and treatment will be covered by Turkey.
“Construction of our new pandemic hospital will be completed within a month and until then we have enough capacity to deal with current and emerging cases.”
Ali Özgöçmen, Head of the Cyprus Turkish Nurses’ and Midwives’ Union, announced that three nurses had tested positive for Covid-19 on Thursday.
“The whole government, especially the Health Ministry is responsible for these infections, as we warned them many times they did not make any provisions against the risk.
“The government, who allowed [people to enter the TRNC] without quarantine, should immediately resign.”
There was confusion in the education sector as schools and preschools partially reopened on Monday only to be closed again three days later after teacher unions threatened to go on strike and many parents refused to send their children to lessons.
Main opposition Republican Turkish Party (CTP) leader Tufan Erhürman slammed the government’s handling of the Covid-19 situation in a statement made via Facebook on Wednesday.
“You have not made any preparation or organisation,” he wrote. “You did not take the necessary measures for face-to-face education.
“Some of the schools and children have sufficient opportunities for distance learning; but some of the schools and children have not. How will this gap between children be closed?
“You have created this chaos. Families, teachers and our kids are paying for your mistakes.”
Covid-19 infections also reached the world of politics and government, with Rebirth Party (YDP) MP Bertan Zaroğlu announcing that he had caught the disease, after another member of the YDP previously said he had tested positive. All campaign events for the upcoming presidential election have been banned until October 1, although the vote itself is still planned to go ahead on October 11.
A call centre employee at the Finance Ministry tested positive last Friday, prompting Finance Minister Olgun Amcaoğlu to order all staff members to be tested.
A further Covid-19 case, at the Finance Ministry’s Treasury and Accounts Department, was susebquently deteced on Tuesday, leading to staff having to work on a “rotational” basis.
On Wednesday it was announced that a cashier at the electricity authority Kıb-Tek’s Lefkoşa branch had tested positive, leading to its closure.
Meanwhile images and videos emerged on social media on Wednesday, before the incoming flight ban was imposed, of crowds of people waiting outside Ercan airport as the authorities struggled to find places for them in quarantine centres.
Long queues of people waiting for PCR tests were seen outside the pandemic centre at Lefkoşa State Hospital.
Self Employed Doctors’ Association chairman Remzi Gardiyanoğlu called on private clinics to be allowed to conduct PCR tests to help ease the strain. “We are being dragged into this chaos,” he said.
The Cyprus Turkish Public Servants’ Union (Ktams) launched a strike on Thursday, which continued yesterday from 8am to 2.30pm.
They demanded that staff at all public and private sector workplaces begin operating on a rotational basis in a bid to curb the rise on coronavirus cases.
Other measures announced by the government this week include the closure until October 1 of casinos, night clubs, discos, cinemas, theatres, funfairs and other music and dancing venues, parks and indoor play areas.
Group sports training exercises, events, indoor sporting activities and camps have been banned until October 1, as have weddings, “crowded” birthday parties and mass prayers, while attendance at funerals has been limited to first degree family members only.
While cafes, restaurants, bars and taverns remain open, there are limits on the number of customers at any one time, with inspections stepped up.
New “arrangements” are in place for barber shop, hair salons and beauty parlours, but massage parlours are closed.

THERE were 155 new Covid-19 cases recorded from 10,433 tests for the seven-day period from Friday September 4 to Thursday, bringing the total to date to 516.
Of the 155 cases, 80 acquired the virus from previously confirmed cases, while 49 were new local infections, 22 entered the country by air, and four came by sea, according to Health Ministry figures. A total of 42 patients were discharged from hospital during the same period.