Feb 15, 2021 9:03 am Ibrar Younas 371
A FUGITIVE who had been on the run for days was captured on Thursday night hiding in a property in the Girne village of Doğanköy. 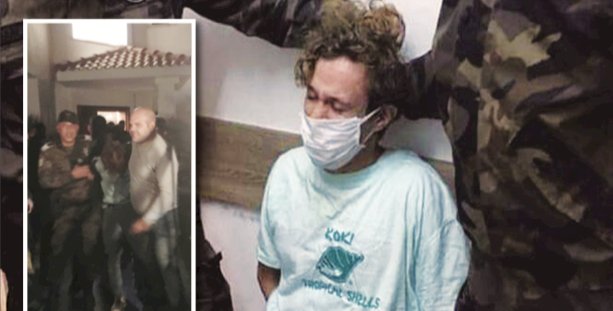 A FUGITIVE who had been on the run for days was captured on Thursday night hiding in a property in the Girne village of Doğanköy.

Alexander Satlaev, reported to have committed several rapes and attempted rapes in Russia, was discovered by police and special operation forces in an empty villa located on Aydın Tepe Sokak at around 6.30pm, a police spokesman told Cyprus Today.

He had managed to escape from the Central Prison, where he had been on remand for an alleged attack on a woman in Girne in 2019, on Monday evening, sparking one of the largest manhunts the TRNC has ever seen. Appeals for information on his whereabouts had been issued in Turkish, English and Russian. President Ersin Tatar congratulated the police and security forces for their capture.

Former Doğanköy muhtar Halil Anıldı, who lives about 150m from the villa where Mr Satlaev, 31, was found, said he believes the property is owned by a British family who are currently abroad and that the street has many expat residents.

“We were terrified when we saw on the news that the fugitive was somewhere in the Girne area,” he told this paper.

“Then we saw the police. My son and daughter were especially concerned for our safety because we heard that this man [has committed] terrible crimes in Russia.”

Mr Anıldı expressed concern over how the incident had been handled by the authorities.

“Three questions need to be asked,” he said. “The first is how can a man who is known to be a dangerous criminal be allowed to freely enter the TRNC? Secondly, why is it that the TRNC did nothing when Russia made a call for the extradition of this man and announced him as being on their wanted list?

“And thirdly, how on earth did he manage to escape from our Central Prison and have any investigations been started to determine how this happened and what measures are being taken to prevent him, or other convicts, from escaping again?”

Unverified press reports said that Mr Satlaev had managed to escape by hiding under a manhole cover and waiting for the main prison gate to open when a “meal car” arrived.

He was initially caught in the village of Dikmen but managed to escape for a second time, losing a shoe in the process. An investigation has been launched into how he managed to get away twice.

Yesterday the head of Prison Officers’ Association, Salih Kayalı, said that there was no CCTV footage from the prison showing Mr Satlaev’s escape.

“There are 100 cameras, half of which are not working,” he said. “Out of the ones that are working, 25 are ancient . . . and there are problems with the floodlight system. There isn’t a day when the electricity doesn’t get cut off. This issue has once again highlighted the urgent need for us to move to a new prison.”

Güven Bengihan, the head of the Cyprus Turkish Public Servants’ Union, condemned criticism of prison officers, stating that the Central Prison is “unsuitable for both staff and prisoners”.

“The staff are not responsible for these problems but rather the authorities who have failed to solve them for years,” he added.

A military helicopter provided support with a searchlight and a thermal imaging camera as night fell.

On Wednesday attention turned to the Lapta area after reports Mr Satlaev, said to have been a police inspector in Russia, was seen there.

Sniffer dogs found a place where he had been sleeping, his water bottle and a “piece of cloth that Satlaev had wrapped around his foot”.

He was eventually tracked down to Doğanköy where it was reported that he had gained access to a property via a window, taken a shower and then changed his clothes. He tried to flee again but was surrounded by police.

Images of the capture showed Mr Satlaev being led away from the property in handcuffs, while another photo appeared to show him in pain while in detention, leading to claims that his human rights had been abused.

A joint press release from the Cyprus Turkish Bar Association, the Turkish Cypriot Human Rights Foundation, the Refugee Rights Association, the Queer Cyprus Association and the Civil Society Initiative said that the ban on “torture” is an “unconditional ban that covers cruel and humiliating treatment and penalties”.

The statement continued: “Based on the images shown in the press, suspicion that Alexander Satlaev . . . was subjected to inhumane treatment has emerged.

“It is a governmental obligation to independently investigate to see if the ban on torture has been violated or not. . . Not doing so would normalise torture and inhumane treatment, as well as causing such treatment to be used as a method of interrogation.”

The statement said that an investigation can be launched “whether or not the victim complains” and that UN and European Convention of Human Rights anti-torture measures are “part of the TRNC’s domestic law”.

“Even if an individual commits the gravest offence . . . their penalty is delivered by the court and the penalty should not be inhumane or humiliating,” the statement added.

In response to the claims of brutality, a police spokesperson said: “Violence and/or torture against any person will not be tolerated. . . We want our people to know that the necessary legal action will be initiated against any personnel who are found to have acted inappropriately or negligently.”

Mr Satlaev, said to be a former detective in the Altay Autonomous Republic, Western Siberia, entered North Cyprus as a tourist on August 19, 2019, despite Interpol alerts for a rape he allegedly committed 15 days earlier in the Russian Federation.

In September 2019 he was arrested and charged with attacking a woman near Kaşgar Court in Girne.

A court heard at the time that his victim fainted after he “strangled” her from behind and stole 300TL and 35 euros from her bag. He has been in custody awaiting trial since.