Oct 20, 2020 11:37 am Ibrar Younas 7407
Cyprus Today Chief Reporter KEREM HASAN was one of the first people to enter the “ghost town” of Maraş when part of it was reopened to the public for the first time since 1974.

IT WAS an overwhelming feeling watching thousands march across the gate to enter an area of Cyprus that has been closed to civilian life for the past 46 years.

Maraş, also called Varosha, is known to us as a postcard image of its coastline clearly visible from the Palm Beach hotel; but also as a ghost town, which bears witness to the bitter recent history of Cyprus.

Thousands of residents – the younger generation – grew up looking through barbed wire at the bombed and collapsing buildings.

Now, all of sudden, people from all walks of life and nationalities – from families with young children to politicians and shopkeepers – can stroll through a gate onto freshly asphalted roads lined with flower pots that have been placed by Gazimağusa municipality.

There they were, now quite literally on the “other side of the fence”, taking photos, selfies and walking freely.

Once one of the most popular holiday destinations in the world at its height, Maraş is said to have been a favourite destination for stars such as Elizabeth Taylor, Richard Burton, Raquel Welch, and Brigitte Bardot

The resort is under the control of the TRNC but classed as a military zone.

The northern boundary of Maraş is 4,000m long and includes 3,400m of coastline and stretches from the Gazimağusa Port road.

The southern tip borders South Cyprus while to the west is the village of Derinya.

During my visit to Maraş on its opening day I observed that many of the larger, concrete, buildings appeared to be in better condition than smaller buildings that have suffered major structural damage.

There was also a reminder of a far greater aspect then the few visible collapsed or crumbling buildings – the existence of a conflict, the isolation of North Cyprus, the rights of property owners, and attempts to bring economic benefits to the country.

Maraş tells this tale. Its walls still have the words “Enosis” (union of Cyprus with Greece) and “Eoka” (the Greek Cypriot terrorist organisation) daubed on them, the root cause of the whole conflict, and why Turkey had to intervene in 1974 to stop the island from being united with Greece.

Maraş has been closed to civilians not because the Turkish side chose to keep it closed, but because of countless rejections by the Greek Cypriot side to have the town returned in exchange for direct flights or trade to North Cyprus. The Greek Cypriot side acted as if Maraş is “in its pocket” and sought more concessions.

The TRNC says that the opening of the town under Turkish Cypriot rule but with respect to the property owners’ rights conforms with European Court of Human Rights (ECHR) judgments.

In contrast, the UN Security Council, in a statement issued on October 9, expressed its “concern” over “Turkey’s announced plan to open the coastline of Varosha” and called for a “reversal” of the decision.

So we now have a situation where the UN is at loggerheads with ECHR judgements. Why can’t the Turkish Cypriot side open the town and bring it under the scope of the Immovable Property Commission? Why isn’t the UN, which purports to champion human rights, supporting this fresh initiative? Should the town be kept closed for another 50 years?

EVERY building had its own tale to tell, hauntingly shadowing down onto us as the very first visitors to walk into the town.

Members of the international media were also present, who were interviewing a Palestinian student studying in the TRNC. The Estonian state television reporter asked him: “Does Varosha resemble the Gaza strip” and “Do you think that the opening of [Maraş] will create more friction?”

I even overhead the student being asked if the move was an “act of war”.

He replied that the situation of Gaza was somewhat different because the people there are squeezed into a small area. The student then added that the town should be used for uniting Cypriots.

The reporter then turned to me and asked the same “act of war” question. Baffled by such provocative questioning, I explained, in the simplest of ways, that the Turkish Cypriots are the victims of this conflict; who fought for generations against Enosis; and who said ‘Yes’ to the Annan Plan in 2004 which was rejected by the Greek Cypriot side.

“The EU and international community supported that solution plan,” I said. “The promises made to Turkish Cypriots to end the embargoes on them, to enable them direct trade and travel . . . made by then EU Enlargement commissioner Gunter Verheugen, were never implemented.

“The Turkish Cypriots are politically and economically isolated. What does the EU expect them to do having been let down? It is an issue of economic survival. This is an important step. Maraş will be opened to civilians, and brought under what is known as the Immovable Property Commission, where former property owners will be afforded restitution, compensation or exchange as a legal remedy that is recognised by the European Court of Human Rights . . . How can this be an act of war or friction?”

She must have been relieved at being able to visit even this stretch of the town, I said. I offered her water but she declined.

MARAŞ could become a source of income for so-called “dark tourism”, it has been suggested. Dark tourism is defined as tourism that involves “travelling to places associated with death and suffering”.

The idea has been raised by Tourism and Environment Minister Kutlu Evren, who said he had plans to turn the reopened part of Maraş into a “touristic hotspot”.

“Maraş is a place of historical interest,” he said. “We are currently looking into how we can make Maraş a dark tourism place because it is an area that has been closed for 46 years, and a place of immense interest because of its glorious past.”

“The Greek Cypriots aren’t interested in sharing Cyprus with the Turkish Cypriots,” he said. “They won’t even share the [island’s] natural resources, never mind sharing power.

“Therefore, opening [Maraş], and allowing its rightful owners to take back their properties is most definitely a humane act. Now what needs to be done is to start planning on how to slowly start using Maraş for the benefit of tourism.”

Mr Kent, who was the first Turkish Cypriot hotelier and who started up the Celebrity hotels group in Lapta, called on North Cyprus to “be creative and allow the marketing of Maraş as a dark tourism hotspot”.

He added that it is the “most unique place on the island that tells the tale of what has historically happened in Cyprus and why”.

“There was a need to start somewhere in opening the town to civilians in a manner that conforms to international law,” he said.

“However, North Cyprus should make use of the opened part of Maraş for dark tourism. It is an open testimony to the history of Cyprus and why the town has been left stranded in time since 1974.

“There were many attempts to reopen it but they were rejected by the Greek Cypriot side in plans put forward by [former UN Secretaries-General] Kofi Annan [in 2004] and Boutros Boutros-Ghali [in] 1994.

“Maraş is therefore a window to the past and enables tourists to see firsthand what was known as the pearl of the Mediterranean at the time, and see the former glory of one of the most beautiful towns of the 1960s and 1970s which, because of the Greek Cypriot aspiration . . . to make Cyprus a Greek-ruled island, gave way to the present day conditions.

Mr Kent, who is 86, said he last visited Maraş in 1973 with his wife Valerie and was refused service at the Constantina hotel – now the Palm Beach hotel – “because I was Turkish”.

“This once booming town enjoyed miles of sandy beaches and dozens of grand hotels,” he said.

“It was luxury in the Mediterranean with the most beautiful near-white sandy beach and turquoise blue waters.”

Richard Chamberlain: “Maraş can be new jewel in the crown of North Cyprus”

TRNC resident Richard Brian Chamberlain said he was “amazed” that the North Cyprus authorities had decided to open Maraş.

Mr Chamberlain, who moved to Ozanköy in 2015, published a book called “Cyprus Scenes and Way of Life in 1954” that includes photographs from Maraş, including Democracy Avenue.

In 1953, Mr Chamberlain joined the British Army under the National Service scheme. After basic training he was posted to Cyprus.

Speaking to Cyprus Today, Mr Chamberlain, 85, said: “I thought I had arrived in paradise. My army camp was just outside Famagusta, known as ‘4 Mile Point’.

“Being as it was so near Famagusta, the soldiers spent a lot of their off-duty time in Famagusta, or on the lovely beach and clear blue sea.

“I was interested in photography as a hobby, before I went into the army, so I took a camera with me when I was sent to Cyprus.”

Mr Chamberlain said that he had wanted to enter the sealed-off military zone of Maraş “for many months” but was not given permission.

“I wanted to take photos of ‘then and now’, showing how much things have changed,” he said.

“To my amazement, the authorities recently decided to open up the closed area, so I was very excited to think that I could finally get in there to try and recognise some of the places I had photographed.

“Obviously all the shops and buildings were still in a state of ruin or disrepair, but even so, with the help of the photos in my book, I was able to identify places I had photographed all those years ago.

“I had a mixture of excitement and sadness while walking round, but I am very grateful that I have been able to go in there and see it before I die!

“It was one of my most extraordinary experiences since I have been back to live in Northern Cyprus. Although some of the buildings will probably have to be demolished, I think the majority of the shops could be made good again.

“I think it was definitely the right thing to open up part of Varosha to the public, and I hope it won’t be too long before more of this former lovely city or town will be opened up. I think, with a lot of goodwill and money, it could again be a jewel in the North Cyprus Crown!” 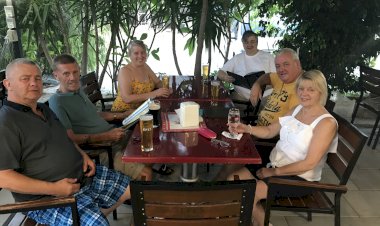