Jan 18, 2021 9:06 am Ibrar Younas 1336
PRESIDENT Ersin Tatar became the first person in North Cyprus to receive a Covid-19 jab yesterday after 20,000 doses of a vaccine produced in China arrived in the country by air ambulance from Turkey on Thursday. 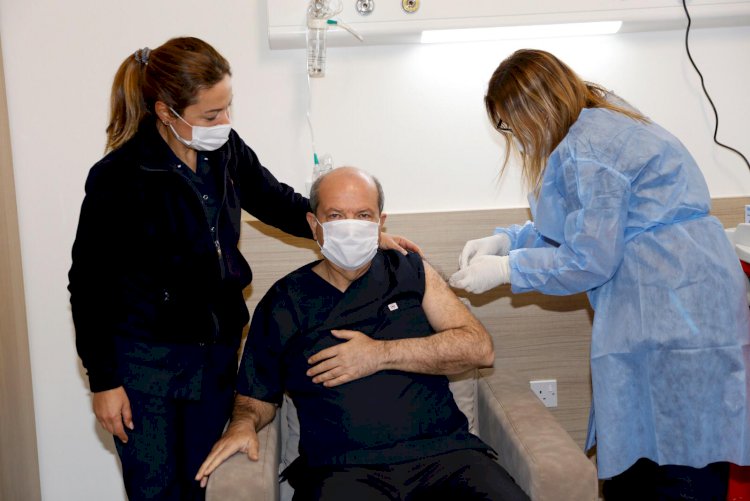 Mr Tatar, Prime Minister Hamza Ersan Saner and Health Minister Ali Pilli lead the campaign as the first three to receive the CoronaVac jab, produced by the Beijing-based firm Sinovac, at the Emergency Hospital in Lefkoşa.

The Health Ministry says that the 20,000 doses will be used to vaccinate 10,000 people with a 28-day gap between the first and second jab.

They will first be administered to some 5,000 healthcare workers and then to people over 65.

The vaccination of healthcare workers started yesterday, with Dr Pilli added that the “vaccination process will be finished by the end of March”.

In a later statement made by the Ministry of Health, it was stated that “citizens aged 65 and over” should apply through an email address – covid.asitshd@gmail.com.

PM Saner said that the aim is to “vaccinate 200,000 people and reach 500,000 vaccines”. He suggested that “the importance given to the Turkish Cypriot society’s health can be seen”.

“Turkey sent us 20,000 vaccines when it is really hard to find vaccines around the world,” Mr Saner said.

“We are in a leading position when the number of cases and deaths are compared [to other countries]”.

President Tatar reported after receiving the jab that “he feels quite good”. A written statement from the Presidency said that Mr Tatar thanked the authorities of the Republic of Turkey and everyone who contributed to the vaccine.

“Mr Tatar expressed belief that by regaining health through vaccination, the problems experienced due to the pandemic in the economy and all other areas will be overcome and they will be restored to their former levels.

“There is a world-wide struggle and competition and we begun our vaccination with jabs that came from Turkey.”

Referring to the issue of vaccines coming from the EU, Mr Tatar said that “it is not right to create dissent over this topic”.

He continued: “This is a human matter. We will receive vaccines from the EU.” He also called on members of the public to get vaccinated within the programme of the Health Ministry.

The government is pinning its hopes on a successful vaccine rollout so that tourists and higher education students can return to the country later in the year once a “certain ratio” of vaccinations has been reached.

After receiving his jab, Dr Pilli announced that 1,000 vaccines will arrive from the EU on Monday which are planned to be used on people over 65 years old.

It was also reported that a Pfizer official recently visited Cyprus and travelled to the North to train staff who will administer the jabs.

The developments came as new research looked at the levels of trust in Covid-19 vaccines among Turkish Cypriots. A study by Near East University showed that only 46 percent of respondents said that they wanted to be vaccinated against Covid-19, 25 percent were unsure, while 29 percent said they do not want to get inoculated.

Forty-four percent of those who took part in the survey said they were worried that Covid-19 vaccines may have serious side effects.

Separate research by the Greece-based Metron Analysis company claimed that 85.4 per cent of people in the TRNC said they would get inoculated with vaccines produced in Europe or the US.

This rate drops to just 43 per cent for a vaccine produced in China, while 18.8 percent of those quizzed stated that they will “definitely not get the Chinese vaccine”.

Some 79 percent of those who said they would not be vaccinated cited concerns over potential side effects.

Meanwhile schools in North Cyprus are preparing to reopen on Monday after the traditional half-year February holiday was brought forward to the beginning of January following a spate of Covid-19 cases in schools before the start of the year.