May 17, 2020 9:20 pm Ibrar Younas 184
Council chiefs came under fire this week for running heavy machinery across one of the country’s most scenic turtle-nesting beaches. But Lapta municipality insisted the work to clean Güzelyalı beach ahead of the summer nesting season had been done with approved equipment and proper permission.

Among the machines used was a newly-purchased mechanical sand sifter.

Karşıyaka Turtle Watch leader Jenny Tyler said: “I was in tears  at the sight of an excavator and JCB at the beach.”

Recently appointed Environment Protection Department head, Osman Bora Çağakan said : “The municipality did not obtain our permission nor that of the District Office, but they started work at the crack of dawn and by the time we arrived the work had been done. 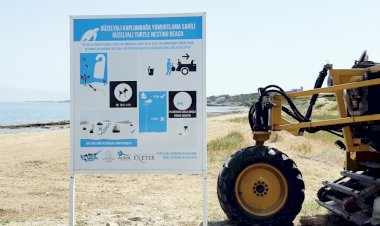 “I have spoken to Society for the Protection of Turtles (Spot) experts and am aware of an application for protection for part of the beach.”

He said that no heavy equipment had entered the beach, rather a ministerially approved machine which had already been used on North Coast beaches from

Lapta to Esentepe, and that no damage was done to nesting areas.

Municipality supervisor Zafer Hüray added: “Last year we used a tractor to clear rocks from the left hand side of the beach and more turtles nested there.

“This machine is much better. I know how important the turtles are and attended nesting events last year. My own daughter, Sevgül, has volunteered for the project this year.

“I contacted the Spot office last year about cleaning and they told me that work must be completed by May 15 when nesting could begin.”

Environmental and Turtle Project leader, Dr Robin Snape commented: “It is true that turtles will keep coming to nest and that no lasting damage has been done to nesting.

“However, when we were contacted about three months ago, we advised that the mechanical sand cleaner was unnecessary and also against removing vegetation.  The municipality was asked to call back, be more specific and follow our advice.

“It seems to me that they are creating more beach space for human use at the expense of biodiversity and we have recommended in every annual report that some areas should be preserved with walking trails.

“Removing sea grass and rocks is counterproductive as they keep sand in place. The beach changes dramatically until June as more sand will probably be deposited from the sea which will cover the sand grass anyway.”

Mrs Tyler said: “We have all been so excited about the start of the new season and it was heartbreaking to see the devastation.

“One couple have been patrolling already and we alerted this year’s project leader Meryem Özkan, who came immediately. The area by the municipality cafeteria has been reduced to mud and the beach is covered in tyre tracks.

She added: “People can be very well meaning but still inflict damage on the environment. Turtles only nest once every two or three years, so it is not the same turtles returning this year. We have someone on the team this year to keep statistics.

“The beach has to be viewed in terms of its entire ecology, not just the turtles.Other beachgoers are downright disrespectful and we have had a lot of problems here in the past.

“Nesting cages have been used to dry towels, as football goalposts or to anchor  surfing kites. Cages were being moved or swapped around so that we could no longer trust the name tags and nesting dates and were mis-identifying the nests.

“There has also been camping on the beach which is just not on during nesting.

“The former restaurant owner Mehmet, was very supportive and always collected sunbeds in the evening so as not to obstruct the turtles as they negotiate the beach to nest.We hope that the municipality will be very diligent this year.

“KTW has a team of 24 this year, down from  40 last year but in the old days we were just 12.  We will cope and will be out on patrol from Sunday or earlier if we get one of the first nests.”