Fire disasters in our country continued yesterday. Fires in Ulukışla, İskele and Alayköy darkened the soil and destroyed the cultivated areas. The disaster caused by the fire in the forest area of Tepebaşı was seen clearly.

With the increase of temperature, fire news started to come from different points of our country. Fire crews intervened in more than 20 fires in last 3 days. Yesterday, there were 3 different fires, and again, acres of land became ash. Dry grasses and 5 pine trees burned in the 400-acre area in Alayköy.  500-acres of wheat field burst into flames in Ulukışla and the fire spread to Aslanköy. Fire fighters and volenteers were able to bring the fire under control within few hours. 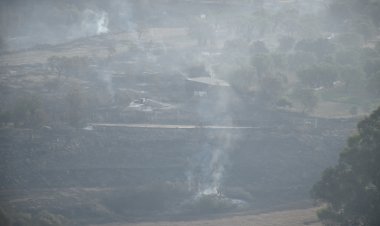 The damage of the flames to the nature appeared more clearly yesterday. In the fire, which is estimated to be more than 5 thousand hectares, various types of trees, vegetation, memorial olive trees, and the restaurant of Çetin Eren were completely burned. Many creatures who could not escape from fire were also destroyed. On the other hand, Deputy Prime Minister Özersay announced that there is a suspicious person about the forest fire and the investigation is continuing.