May 17, 2020 9:07 pm Ibrar Younas 213
The motoring world mourned the recent death of Sir Stirling Moss, but for retired engineer Mike Dodd, it also marked the loss of a great friend. Mr Dodd, from Karşıyaka, met the motor racing legend when he was working for Dunlop tyres on the Denovo Safety Tyre design.

He was tasked with promoting the revolutionary new tyre to prevent blow-outs in India and Malaysia “as I was the only one who could explain it. The marketing and PR people didn’t have a clue. You could blow a tyre at 114mph on the Rover P6B 3,500hp V8 and still drive it.

“Stirling was smart though, showed great interest and really understood it. Dunlop wanted him to endorse it and he quoted us his price in guineas, always the English gentleman.”

Stirling loved Asia and he especially loved being associated with the new technology, said Mr Dodd. 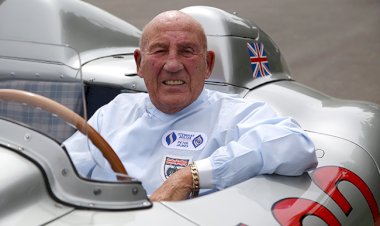 “Stirling was my hero since I was five years old, so you can imagine how I felt when I actually met him. Our loyalty to each other really developed during that four weeks in India and Malaysia and he became my close friend for life.

“When he flew in first class to Kuala Lumpur he told the press reception he was ‘a simple man’. The Straits Times translated it as ‘a simpleton’. He thought that was hilarious.

“We were all VIPs over there. He was always very patriotic. We were out one night, Stirling and the gang, in New Delhi and this Australian comedian was taking the mick out of the Brits, really pushing his luck and making a few people fidget.

“Stirling just said: ‘I’ve had enough of this’, just got up and walked across the ballroom. Everyone knew who he was and the comic just fell flat.

“In Malaysia, he and I met at the Hilton for the Denovo presentation which

continued at their equivalent of Brands Hatch. We were up there with royalty and got some VIP to puncture a race car’s tyre wall with a goldplated kris, their traditional weapon.

“That car would then go round and round the circuit throughout the shindig to demonstrate that the Denovo tyre could still perform.

“I still have that kris, it was presented to me with a dedicated inscription and it’s one of my most treasured possessions. I even had to have extra security as some extremist organisation sent death threats as we had insulted their honour by using the kris to puncture the tyre.

“My other favourite souvenir is a copy of ‘All But My Life’, Stirling’s biography by Ken Purdy, which he inscribed to me ‘To Mike - with admiration’.

“He was a legend. Unlike most racing drivers of today, he saw risking his life as part of the thrill. He rather unfairly got a reputation as a car wrecker after he nearly killed himself twice driving for Lotus. Lotus Cars owner Colin Chapman always said ‘to produce a faster car, you add lightness.’ They were fast but flimsy and Stirling knew that very well.

“We were like chalk and cheese really and I still remember when he came on one of his numerous visits to our home in the Ferrari and took me and then my wife, Celia, for a spin.

“He was the motoring journal writer and road tester for Harpers magazine and they’d loaned him the car. We had a pretty wild ride. He was the kind of driver that by the time you had worked out he was going to have an accident, he’d got out of it.

“You also haven’t lived until you’ve driven in convoy with him in the West End of London!”

Celia Dodd smiled at the memory: “Stirling was always very suave, good looking and knew just how to talk to the ladies.  I think the reason he felt so at home with us was because we didn’t treat him like the superstar he really was.

“He even came to open our school fete for us. One mother said to me: ‘Doesn’t he look just like Stirling Moss.’ Yes, I said, that’s because he is, and he’s a friend of Mike’s.